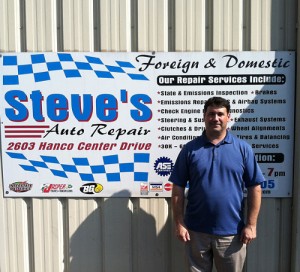 Two of the areas most respected youth football organizations are teaming up with the Prince William County/Manassas Boys & Girls Clubs to raise $50,000 in partnership with Steve’s Auto Repair in Woodbridge.

Northern Virginia Youth Athletic Association (NVYAA), American Youth Football lead by President Tony Keiling and Prince William Pop Warner Football led by President Terry Hubbard are in a head to head contest to sell the most car raffle tickets for a 2001 Crown Victorian for the Boys & Girls Club. “We support the community and we support the Boys & Girls Club” says Tony Keiling of NVYAA “None of us are able to impact the community by ourselves, that why we support one another.”

Both organizations football programs are run out of different Clubs. NVYAA-AYF operates their program from the Hylton Boys & Girls Club in Dale City and Prince William Pop Warner is based out of the Manassas Boys & Girls Clubs. “We have 5,000 car raffle tickets to sell by March 29. We are confident that these 2 great programs will help us reach our $50,000 goal” says Regional Director Glenn Vickers. “What makes both programs special is their commitment to education and good citizenship. This friendly rivalry between each league is a great example of good sportsmanship and fair play.” says Vickers.

Tickets for the raffle are being sold at all 3 Boys & Girls Clubs in Dumfries, Dale City, Manassas, and Steve’s Auto Repair and with members of both NVYAA and Pop Warner. Terry Hubbard stated “The response from our Pop Warner Family has been great, may the best league win” The raffle will be pulled on Friday March 29 at 6pm at the Hylton Boys & Girls Club 5070 Dale Blvd Dale City VA.