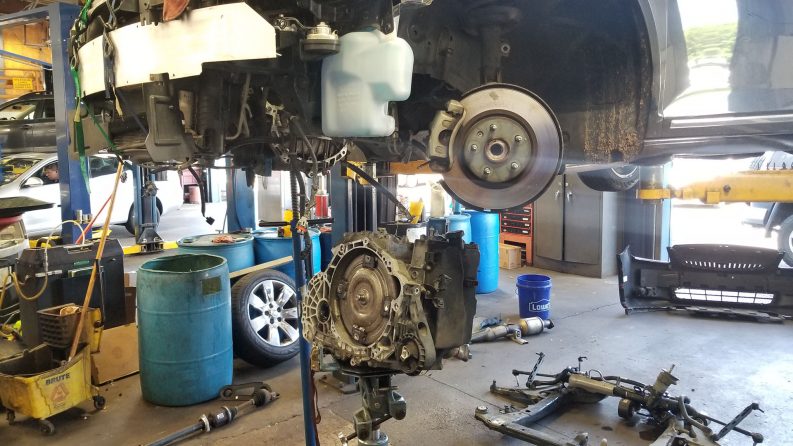 The case of a mysterious starting problem has been closed. Like many repairs, the issue required some digging.

Our Woodbridge mechanics recently worked on a Buick Lacrosse that refused to start.

At first, the issue was occurring intermittently. Our customer would turn the key and it may not have “caught” to start the vehicle.

Eventually, it reached the point that every time the driver would turn the key they could hear the starter trying to engage. However, it just sounded like it was spinning and nothing was happening. So, they had the vehicle towed to Steve’s Auto Repair.

What was causing the starting problem?

When we looked into the starting problem, we found that the teeth on the flywheel were chewed up. For some reason, the bushings in the starter were going bad and bouncing up and down. As they did, they would sometimes chip off the top edge of the flywheel. 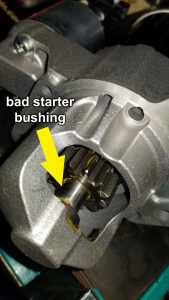 Over a period of time, it just kept wearing down and the gap continued to grow bigger. Instead of having one or two teeth chewed up, it became five or six. As the engine stopped, it would be in about the same spot but the starter gear wouldn’t engage the gear on the flywheel. 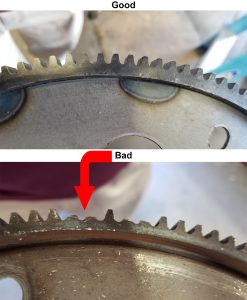 In order to replace the flywheel, we needed to take the transmission out. Our technician also changed the starter, which was the original cause of the problem.

A clicking noise when starting a vehicle and a slight grinding sound can be signs that you need a new starter.

What is a car flywheel?

Some flywheels have slots that help produce the signals for crankshaft position sensors and other computer inputs. This is not the case as much as it used to be, but some cars still may have them.

This Buick has an automatic transmission. The flywheel on a manual transmission is much thicker, because the pressure plate and clutch disc bolt up against the flywheel.

So, as you push in the clutch it disengages from the flywheel from where the engine is spinning. Then, as you let out on the clutch, it engages the flywheel to help transfer that power from the engine to the manual transmission. Those flywheels are generally much thicker so they are able to take the heat and transfer the power.

Problems to watch out for

If you hear noises that don’t sound right when you’re starting your car – maybe it’s making a bit of a grinding noise – you will want to get it looked at soon. That way you can avoid a costly repair – like removing the transmission to replace the flywheel, rather than just installing a new starter. A repair that could have cost a few hundred dollars is now a couple thousand dollars.

Make sure to also note if your car seems to be having trouble turning over, or if it seems to be cranking more slowly than usual.

Electronics not working right and the battery light turning on – possible signs of an alternator going bad – are other problems to keep an eye out for.