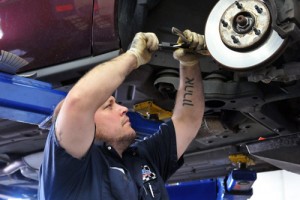 Matt Ledman spends more time with his family now that he’s not spending three hours a day commuting to and from work.

A mechanic who specializes in Mercedes Benz automobiles, Ledman traded working in Tysons Corner for a job at Steve’s Auto Repair in Woodbridge. He’s found a way to continue to make competitive “Northern Virginia wages” and work close to home.

“I’m about 15 minutes from here, and I can go home for lunch if I wanted to,” said Ledman.

Of the nine employees at Steve’s Auto, seven of them live in Prince William County. Living close by allows the mechanics to focus more on the job and less on the stress of their commutes.

Another employee who traded in his commute for a job at the shop said people here are just plain nicer.

“I got so tired of the people on the roads without common courtesy or respect for other drivers,” said mechanic Eran Mehler, of Lake Ridge, who used to work in Arlington.

Before ST Billingsley purchased Steve’s Auto Repair seven years ago he used to leave his house at 5:05 a.m. weekdays for work in Tysons Corner. After taking over the Woodbridge business he worked to hire a team of qualified mechanics, and quickly learned that if they lived nearby it was a huge bonus.

“The one thing we don’t complain about here is traffic,” said Billingsley. “Having one thing off our plate has made it a better work environment.”

But Billingsley’s local employees are the exception to the rule. According to 2010 U.S. Census data, 62 percent of workers must leave Prince William to find work. What’s more, 14 percent must leave the state for work.

But those commuters who clog interstate highways, pack commuter buses and trains, and are the impetus for more toll lanes in the region, are a necessary evil. Prince William’s largest employers are retailers like Walmart and Target, a day care provider, and Sentara Northern Virginia Medical Center. That’s not enough to employ a large percentage of workers in a bedroom community of 400,000 mostly made up of government workers.

Billingsley doesn’t know for sure how many other area businesses enjoy the luxury of having so many employees live close by, but he says hiring local benefits everyone.

“It’s for the economy of Woodbridge: we live here, we work here, obviously we pay taxes here, we buy food here, and with everything so close by it makes everything more enjoyable to work here,” said Billingsley.