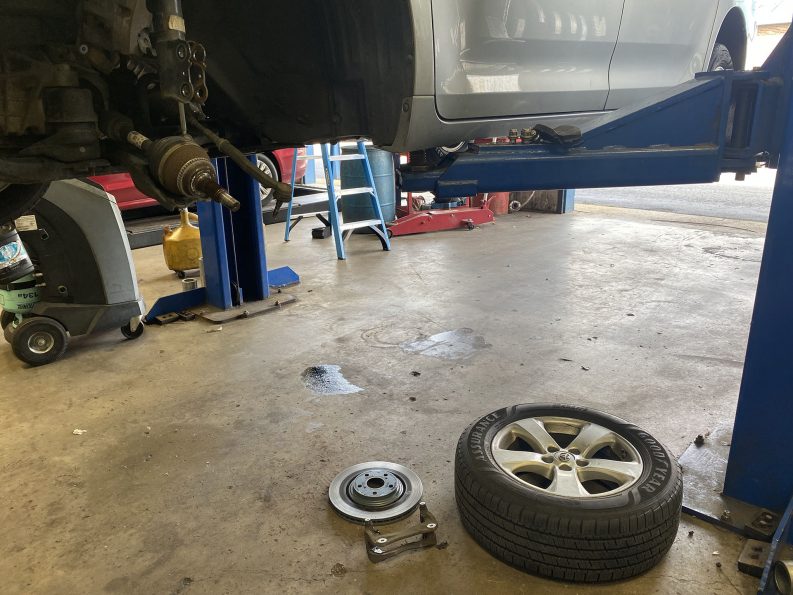 One of our technicians tracked down a grinding noise on a Toyota Sienna this week.

At first, the driver noticed the sound while they were braking. By the time the vehicle reached Steve’s Auto Repair and Tire, it was heard even when the brakes weren’t applied. 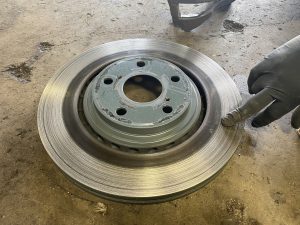 As he took the Toyota on a test drive, the technician heard a growling noise. When it was placed on a lift, he noticed that the tire was loose. The rotor was grinding inside the caliper, and he found a rough spot where it was rubbing.

During a previous visit, we had replaced a wheel bearing. This time, we decided to install a new steering knuckle with a new bearing pressed into it, and a new brake rotor. 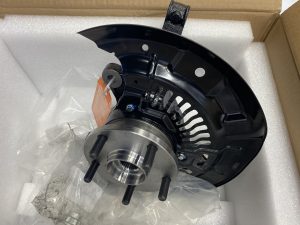 Sounds are one sign that can hint at a car problem.

What causes a grinding noise or growling sound?

There are many possible issues – aside from wheel bearings – that could lead to grinding noises.

You can get a grinding sound when the brakes pads are low or metal to metal. The noise might be an indicator of sand or dirt between the brake pad and rotor, as well.

Brakes must measure at least 2/32 of an inch to pass state inspection. However, they might need to be replaced earlier, depending on what the manufacturer recommends.

A grinding noise may also occur if certain parts are worn or failing, including:

Growling is another sound that could be heard by travelers.

Problems with the following components may result in growling noises:

Some tires can also make a type of growling, especially the bigger truck tires.

Other sounds and noise diagnostics

Grinding and growling are the only sounds that crop up. It isn’t uncommon for drivers to hear other noises, such as squeaking or squealing.

Squeaky brakes can be caused by the weather – especially if it’s the first thing on a damp, cold morning. Rust build up on brake rotors and cold brake pads are possible causes, as well. Another reason some brakes squeak or squeal is if it’s time for them to be replaced.

The answer to why a car is squealing isn’t limited to the braking system. It could also lie in the suspension. Belts that have become worn or are loose can make a squealing noise.

Crunching sounds may mean that a vehicle’s transmission is failing. Meanwhile, clunking noises can be the result of suspension parts going bad, such as sway bar links, struts mounts and control arm bushings.

To determine the source of a sound, our Woodbridge mechanics perform noise diagnostics.

We start the diagnostic testing process by gathering information from the customer (like what was heard and when, and any behaviors). Then, we conduct test drives to see if we can hear it ourselves. This step is followed by recreating the noise and pinpointing its location.