I got a puppy Tuesday night! He’s Chihuahua mixed with I’m not sure but he’s the smallest cutest little thing ever. He’s about 4 weeks old so I still have to bottle feed him. I guess I didn’t think it through adding a baby into my life when I already have a baby. The first night reminded me of the first night I brought Layla home from the hospital. So Wednesday coming into work after a sleepless night isn’t my idea of a good day, but something about being a mom gives you natural energy.

The guys already knew about the puppy because I have been talking about him for the past week and they all told me I was crazy. I think they were thrown off a little because in the picture I had showed them the puppy was brown but the one that was brought back to me was black and from that I named him “Beans”. As any proud mom I have hundreds of photos of him already and the guys joke around calling it a rat. But when I went on my lunch break I drove my 3 min up the road to pick him up and show him off. And of course all I heard them say was awwwww! I think seeing beans gave most of the guys puppy fever. They all told me they wanted a small lap dog now and that rat face was too cute! I kept him with me for about an hour under my desk in my purse and for that hour he was such a good boy. I guess I finally got my boy!! 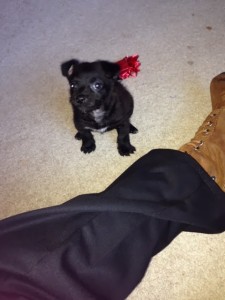