Some car problems can be fixed with just one small piece. However, sometimes replacing that part can be more labor intensive than is expected.

Earlier this week, we addressed an oil leak on a BMW. Our customer brought the vehicle in, because they noticed lots of oil loss. They had even gotten into the habit of carrying around jugs of oil, because they knew they had an oil leak but didn’t know where it was coming from. The undercarriage of the car was completely saturated.

The BMW needed a new alternator bracket oil seal, which can harden and become brittle after a period of time.

To complete this project, our technician had to remove fan components and the alternator. The engine was also lifted up and the engine mounts were taken off. Then, everything was put back together. This process took a number of hours. 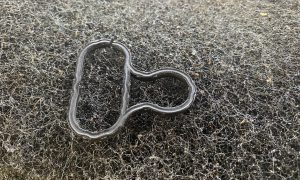 Why oil is important

Different areas of the engine need to be lubricated by oil in order to work properly, and there are oil pressure sensors associated with certain components. This is why it’s important to have regular oil changes performed.

We recommend this service every 3,000 to 5,000 miles, but the frequency depends on the vehicle and manufacturer recommendations.

A lack of oil in the system may result in an overheating engine or an engine seizing.

What can cause oil leaks?

The oil seal going bad is a common problem among V8 style engines. They can start leaking so badly that the oil gets too low, causing engine damage. The seals will, literally, pump the engine dry. So, when these components go bad it’s very important to have them fixed as soon as possible.

Depending on the location of the leak, it could impact the timing belt, serpentine belt and other parts.

Aside from a bad seal, there are several other issues that can lead to oil leaks, such as a damaged oil pan, worn valve cover gasket, and a clogged PCV system.

You may have an oil leak if you notice engine noise, the oil is low, there’s a puddle of oil – which can be brown, black or yellow – near the vehicle, or the car is experiencing running problems.

The oil pressure light turning on is another indicator to watch out for. It warns you that the oil pressure is decreasing. If you notice this symbol come on, you should safely stop the vehicle and check the oil level.

If you notice any of these symptoms, reach out to a mechanic or auto repair shop near you. They can help you find the source of the leak early on and prevent it from growing into a bigger problem.

Our process for finding oil leaks varies among vehicles. Our Woodbridge mechanics usually start by inspecting the three main areas oil will leak from – the valve covers, the timing cover, and the oil pan. There are also different parts that need to be checked within those areas.

If the oil leak is widespread, they will clean it off, add UV dye, drive it for a bit, and see where the first spot is.

Summer is here, which means that many are taking at least one road trip.

While you and your family or friends are having fun, you want to avoid any hang ups. That includes breaking down on the side of the road.

In the days and weeks prior to your next adventure, you should make sure the vehicle you’re taking is ready for the journey. You can’t plan for everything, but there are some things you can do to avoid a problem.

Below is a checklist of items we recommend.

How to prepare for a road trip

Our technicians look over all of the items mentioned above during our courtesy inspections. If you’re planning to go on a road trip soon, feel free to give us a call to schedule an appointment.

Oil changes are typically offered at most places that perform automotive services or repair.

A lot of them will do the required work – change the filter and replace the oil – and leave it at that.

At Steve’s Auto Repair, we care about you and your vehicle, and want to make sure that your car is running safely when it leaves our shop.

During an oil change, we perform a visual digital inspection, checking many points on the car or truck. This includes a range of items that tend to be overlooked.

The battery is one of the many parts we check. Car batteries weaken overtime, and extremely hot or cold temperatures can cause them to die. Testing a car battery may prevent you from getting stranded.

Looking over the belts and hoses, as well as the steering and suspension are also on our checklist. Hoses can become loose, and everyday use could result in components cracking or going bad. You can save yourself a trip to an auto repair shop – and possibly some money – if we address the problem early on.

Brake pads and tires get inspected too. Brakes should measure at 2/32 of an inch to pass the state inspection in Virginia. Steve’s Auto Repair recommends having them changed at 3/32 or 4/32 of an inch, depending on the make, model and manufacturer’s recommendations.

Accessible fluids, such as the coolant and windshield washer fluid, are looked over and topped off. Some can become low without you knowing it and could lead to future problems if they are ignored.

If applicable, a tire rotation is included as part of our oil change. This service can prolong the life of tires.

This work comes at no additional cost.

Other ways we take care of your vehicle

While servicing your vehicle, we use floor mats, seats and steering wheel covers to protect the interior.

Do you want to stay up to date on what’s going on with your car? We complete digital inspections, which provide you with photos, videos and notes on the vehicle’s health. These updates will share which components are good, any safety concerns, or maintenance suggestions we have. They are sent via email and text. Therefore, the customer can see what we see.

You can drop off your vehicle while we’re open – between 7 a.m. and 6 p.m., Monday through Friday. If you do not want to come into the building, staff members are available to meet you outside.

We also have a night owl night service and a free shuttle service.

When they do, you shouldn’t wait long before addressing them.

A puddle of oil near a car and being low on oil are some signs of an oil leak.

Drivers may also notice engine noise – such as a chattering.

Possible running conditions could be prompted by a leak, as well.

For example, vehicles that have a variable valve timing are operated by oil pressure. When it’s low on oil, it won’t work correctly and might appear to be struggling or misfiring.

Different culprits can result in oil leaks. They include:

Another possible cause is if the PCV system all vehicles have becomes clogged, putting too much pressure on the seals.

If you think you have an oil leak, you should bring it to a mechanic or auto repair shop as soon as you can. Driving your vehicle on too little oil can damage the engine because the oil can’t lubricate necessary components.

This is also why it’s important to have regular oil changes performed. We recommend oil changes every 3,000 to 5,000 miles. This article we wrote talks about why they’re needed.

Drivers are discovering an unwelcome guest in the morning — ice on their vehicle’s windows and windshields.

A few techniques can help speed up the defrosting process.

When preparing for the commute, it’s important to spend a few minutes getting rid of the frost.

“You want to make sure that your windows aren’t frosted up on the side, so you can see that car coming or that kid walking across the street,” Steve’s Auto Repair & Tire Owner Scott Whitling said.

Motorists should let their car run for 1 to 3 minutes before hitting the road.

“It allows heat to start to build up and, if you already have your defroster on, you can go ahead and start defrosting the windshield,” Whitling said.

Pointing outer vents to the side windows can help thaw any ice on them.

“It’s a good time to check your windshield washer fluid and make sure that it’s going to protect down to the correct temperature,” he said.

They should check their rear window defroster, as well.

Electricity runs through the lines on the window to melt frost that has accumulated.

“It can take anywhere between, depending on how powerful the rear defroster is, 1 minute to 5 minutes. So, give it a little bit of time, make sure that it works,” Whitling said. “If not, now’s a good time to get your vehicle in to get it checked out.”