You’re about to leave for work and you start your BMW.

The dashboard lights turn on, like normal, but you notice that the check engine light stays on.

If it’s blinking, you should go to an auto repair shop as soon as possible.

A blinking check engine light indicates that there’s a problem with the engine and it may lead to damage to the catalytic converter.

If you own a BMW and your check engine light comes on and stays on, you should have it checked out soon.

There are many reasons why a check engine light turns on.

It can be anything from a loose gas cap to an internal engine problem.

Other reasons include a circuit problem, the catalyst system working below its threshold, and issues with the coolant system.

BMW repair is one of the services that Steve’s Auto Repair & Tire offers.

If you’re going in for regular BMW service, don’t forget to let your service adviser know if your check engine light comes on or if it turns off and comes back on.

When a vehicle comes in with a check engine light on, we start with a visual inspection. During the inspection, we make sure nothing is loose and that the oil and fluid levels aren’t low.

After that, the technicians pull a trouble code, which shows them where they should start the diagnostic testing.

Then, they perform a diagnostic test, through which they are able to isolate the problem.

Does your car not start? Does it crank over, but the engine doesn’t run? Is the little light on your dashboard that looks like an engine on? All these indicate that you need engine diagnostics performed.

It takes quite a few years of training and experience to be able to diagnose today’s high-tech vehicles.

Special scan tools are needed and access to a large database on information to work on your vehicle are needed.

Many times automotive technicians need to start with the basics of a battery and alternator electrical system test to a visual inspection to see if something is obviously damaged to using multi-meters and digital oscilloscopes along with manufacturer scan tools to pinpoint the problem of the vehicle.

These problems can range from broken wiring to components not working to software updates that are needed to make the vehicle operate correctly.

Where there used to be only one computer in the car, there can be up to 30 or more controllers and electronic modules operating the vehicle. Not only do they have to perform their function in the vehicle, they also have to talk to each other. One not working correctly can cause some strange problems. 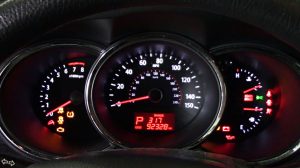 How much are engine diagnostics?

Engine diagnostics can vary. You should be prepared for at least a one-hour diagnostics charge. Depending on how difficult the problem is more time may be needed.

At Steve’s Auto Repair & Tire, when we do get into engine diagnostics there have been time we have found the problem in 30 minutes, and we charge accordingly.

Do you do free check engine light diagnostics?

No. We do charge for what we do, because the equipment and talent required to do it isn’t free. A lot of places that do free check engine light diagnostics will do it if you have the work performed at their shop and they will bury the cost into the job.

How can the parts store do check engine light diagnostics for free?

They’re not performing engine light diagnostics, they’re hooking up a generic scan tool and retrieving the codes and many times just make recommendations on what parts to buy that may or may not fix the vehicle. That is not engine performance diagnostics.

My car won’t start. What now?

We would start with a basic electrical check of the battery, alternator and starter. If all checks there, we would go to the computer and retrieve the codes and then find out what sensor or control system is not working correctly.

They also expressed concerns about how gas pumps would click off while they were pumping gas.

After we hooked up the computer to the car, a few codes appeared — one of them was related to the canister vent solenoid.

The evaporative system on today’s cars collect the gas fumes and then the computer will control the release of the fumes into the engine. They will be burned while driving, preventing them from going into the air and harming the environment. There are electronic systems on here that can fail over time.

The canister vent solenoid failing is a common issue found in Nissans. When it isn’t working properly, it won’t open as it should. So, when you get gas, it doesn’t allow the air to escape while you’re filling up. This will extend the time you spend at the gas station.

To do the testing, you have to remove the fender well on the left rear of the vehicle to verify that the solenoids aren’t working. Since this is a place that gets a lot of water, other metal components, including brackets and wiring, rust. We have found that it’s better to replace the evaporative charcoal canister with the solenoids.

After clearing the codes, we go for a test drive, reset the monitors to make sure the vehicle is fixed, and everyone is happy.

When you have car problems, it can be a real bummer. And sometimes, depending on what problem you’re having, it can be a mystery too.

Recently in my own car, I noticed that the ABS light and traction control light would come on when I hit the brakes, and I couldn’t figure out why. Over time, even very light taps on the brakes would make the lights come on, and they would stay on until I turned off the vehicle. After a few days of this, I had had enough – and I snapped a photo of the lights, and brought it to our guys in the shop.

That photo really came in handy – but I’ll talk more about that in a minute.

A few weeks back we also had a customer that ran into the shop, telling us that she had left the car running, so our service writers could see the problem firsthand, because the problem would only happen when the car was running.

And another one of our Girl in Mechanic’s World bloggers, Jasmine, had a problem where her car was misfiring, and because there was no audio or video recording of it, it took several days to diagnose and get the problem to replicate itself.

Taking a photo, a video, or showing the problem when it’s happening in your vehicle is actually more important than you know, and can save hassle and time, so the guys can get you back out on the road.

In my own case, one of our technicians wasn’t able to replicate the problem, but with the photo I took, an inspection, and some testing, they were able to determine that it was a sensor behind the tire that was malfunctioning, and they were able to fix my vehicle and get it back to normal.

While some problems can’t always be captured – and I strongly suggest against taking photos or video when you’re behind the wheel, driving – if you can safely snap a quick photo, video, or write down the specifics on the problem, including where you were, what time it was, and what was happening when the problem was occurring, it will make it much easier to diagnose and fix your vehicle.