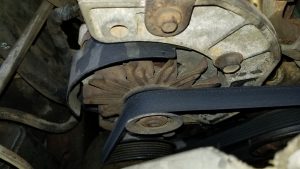 Like other cars, they come with their own benefits and drawbacks.

One common problem lies with the cooling fan for the battery pack, which can wear out.

This component does have vent tubes coming in and out to help direct the air around the battery pack and outside the vehicle. 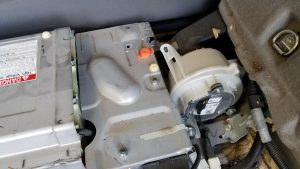 Generally, when there’s a problem with the cooling fan, the check engine light will turn on and there will be a code for the hybrid battery pack cooling system. The lifespan varies, with some beginning to go bad as soon as three years. Typically, they last between five and eight years.

The cooling fan going bad isn’t a big issue. It’s not overly expensive to fix, but you do want to use high quality parts. This is not a time where you should use aftermarket parts. It needs to be functioning correctly so everything is working with the computer.

One of the things to watch out for is people carrying stuff in their vehicle, whether they’re going to Lowe’s and mulch gets spilled there, or lots of papers and clothes pile up. Depending on where it is and how packed it gets, the clutter can block some vents and impact the vehicle’s ability to cool the battery pack.

On the back of the Toyota Prius, you can see both batteries. You have the 12 volt battery that will run your lights and wiper blades. Meanwhile, the hybrid battery pack is located behind the rear seat. The orange tab is the battery disconnect, in case you need to do any work.

When working on these cooling fans, you will want to make sure that the air ducts are in good working order, and aren’t broken, blocked, or venting back inside the car. It’s important that they are repaired correctly.

Battery packs: When to replace them 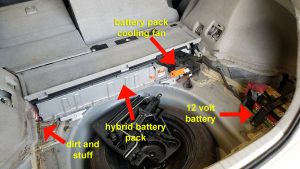 The battery packs tend to go bad every eight to 10 years. It’s always good to go with the factory module. I would be wary of aftermarket ones, but we have put a couple in from different manufacturers and we’re still testing them out to see how they do in the long run. So far, so good.

As you start to see the mileage decrease over a period of time, it could have to do with the cells in the battery pack. They’re just like any other battery. Eventually, they will wear out or certain cells will have a problem.

Once you hit around the eight year mark, it’s probably a good idea to replace the entire pack over changing out the individual cells.

An extra tip for hybrid vehicles: With hybrid vehicles, such as the Toyota Prius, make sure to use tires like the Goodyear Assurance CS Fuel Max. Some of these tires feature low rolling resistance to help give you better fuel efficiency.

These are just some things that owners of hybrid vehicles should keep in mind.

Summer is here, which means that many are taking at least one road trip.

While you and your family or friends are having fun, you want to avoid any hang ups. That includes breaking down on the side of the road.

In the days and weeks prior to your next adventure, you should make sure the vehicle you’re taking is ready for the journey. You can’t plan for everything, but there are some things you can do to avoid a problem.

Below is a checklist of items we recommend.

How to prepare for a road trip

Our technicians look over all of the items mentioned above during our courtesy inspections. If you’re planning to go on a road trip soon, feel free to give us a call to schedule an appointment.

Oil changes are typically offered at most places that perform automotive services or repair.

A lot of them will do the required work – change the filter and replace the oil – and leave it at that.

At Steve’s Auto Repair, we care about you and your vehicle, and want to make sure that your car is running safely when it leaves our shop.

During an oil change, we perform a visual digital inspection, checking many points on the car or truck. This includes a range of items that tend to be overlooked.

The battery is one of the many parts we check. Car batteries weaken overtime, and extremely hot or cold temperatures can cause them to die. Testing a car battery may prevent you from getting stranded.

Looking over the belts and hoses, as well as the steering and suspension are also on our checklist. Hoses can become loose, and everyday use could result in components cracking or going bad. You can save yourself a trip to an auto repair shop – and possibly some money – if we address the problem early on.

Brake pads and tires get inspected too. Brakes should measure at 2/32 of an inch to pass the state inspection in Virginia. Steve’s Auto Repair recommends having them changed at 3/32 or 4/32 of an inch, depending on the make, model and manufacturer’s recommendations.

Accessible fluids, such as the coolant and windshield washer fluid, are looked over and topped off. Some can become low without you knowing it and could lead to future problems if they are ignored.

If applicable, a tire rotation is included as part of our oil change. This service can prolong the life of tires.

This work comes at no additional cost.

Other ways we take care of your vehicle

While servicing your vehicle, we use floor mats, seats and steering wheel covers to protect the interior.

Do you want to stay up to date on what’s going on with your car? We complete digital inspections, which provide you with photos, videos and notes on the vehicle’s health. These updates will share which components are good, any safety concerns, or maintenance suggestions we have. They are sent via email and text. Therefore, the customer can see what we see.

You can drop off your vehicle while we’re open – between 7 a.m. and 6 p.m., Monday through Friday. If you do not want to come into the building, staff members are available to meet you outside.

We also have a night owl night service and a free shuttle service.

We hope everybody is getting through this time of staying home. We know it’s been tough on a lot of people.

As people are starting to go back to work over the next few weeks, it’s a good idea to go out and check your car. There are some car problems you can expect.

Car problems to be aware of

Vehicles have a lot of electronics on them, including the radio, clocks, alarm systems, and computers. Over a two week period, that can drain the battery. These are other factors that can cause a car battery to fail.

Jump start your car using jumper cables or a jump box have it run for at least 30 to 40 minutes.

Low tire or TPMS light on

Having a low tire or flat tire, or the tire-pressure monitoring system (TPMS) light turning on are some other issues that could come up.

While a vehicle is sitting, its tires can lose air over time, or there may be a small leak that wasn’t noticed before.

TIP: Be careful when using gas station air pumps. Most of the time, the gauges are wrong.

Once you get on the road, you might notice a rotating grinding noise, especially when you step on the brake. Most likely, this is from rust building up on the rotors and drums. Most likely, it will go away between 12 and 15 minutes. If it doesn’t, you may want to have it looked at.

The check engine light could also turn on. We have been getting a code for the Evaporative Emission Control System (EVAP) and finding that the gas cap seals are the culprit. We recommend clearing the code, top off the car with some fresh gas, replacing the gas cap, and driving it to see if the light comes back on. If it does, we know that we need to do check engine light diagnostics.

We also suggest having your vehicle’s cabin air filter changed — not just because of the Coronavirus, but because of pollen season.

This is a perfect time to change the filter, which purifies the air that goes into the front of a car.

Part of our replacement service includes using BG Frigi Fresh, a disinfectant that gets rid of viruses and bacteria.