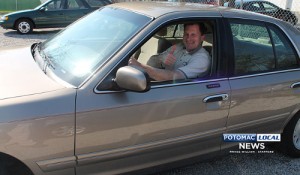 Mike Nies picks up his new car awarded to him from Steve’s Auto Repair in Woodbridge after a raffle benefiting the Prince William County Boys and Girls Clubs.

Mike Nies has a new car. Well, it’s not a new car but it’s new to him, and he won it after purchasing 10 tickets from Steve’s Auto Repair in Woodbridge in a raffle to support the Greater Manassas / Prince William Boys and Girls Clubs. So, what kind of car did Nies win for his $100 donation? A 2001 Ford Crown Victoria – similar to what police officers drive.

Nies plans to use the car for his home improvement business that takes him to see customers between Haymarket and Arlington. He came with his wife, Christine, and 2-month old son “Lil’ Mikey” to Steve’s Auto to claim his prize. He was excited but his wife wanted to know one thing: “Does it get better gas mileage than our SUV?” she asked.

It doesn’t, but the car was well cared for throughout it’s life by technicians at Steve’s Auto Repair.

“The car belonged to one of our customers, and when they wanted to get a new car we took this one off of their hands and decided to raffle it off to the community to benefit he Boys and Girls Club,” said ST Billingsley, the repair facility’s general manager.

The raffle was held on March 29 at the repair shop, and Neis was actually the runner up. Billingsley said he called several times to notify the first winner but no one answered.

Neis picked up his prize on Friday and had some advice for the person whose name was drawn.