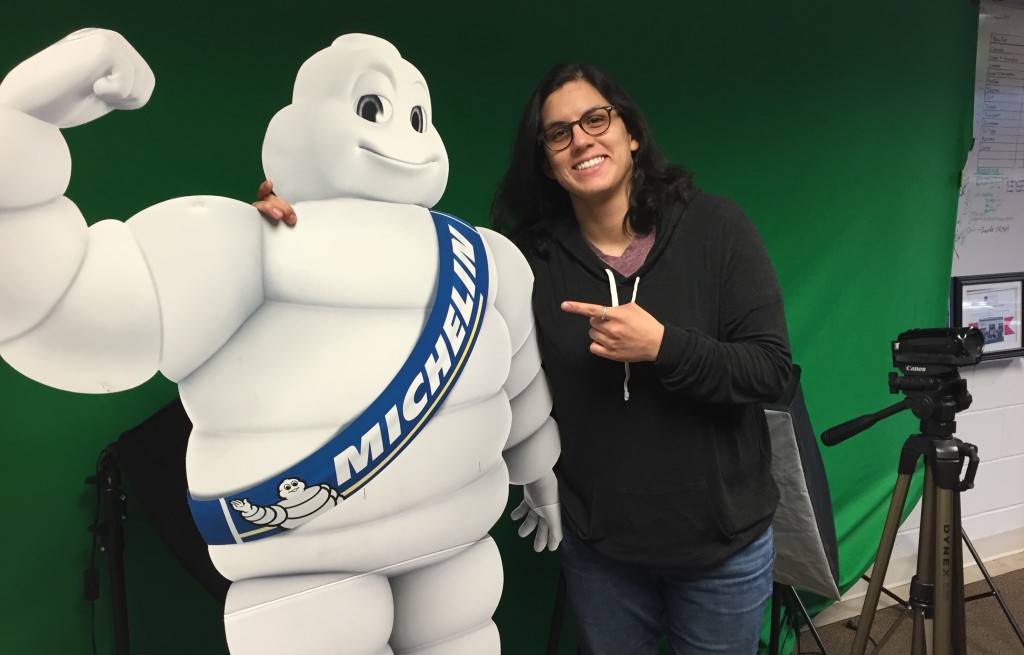 She was taking film classes at Northern Community College, and her professor connected her with local businessman, ST Billingsley, who offered her a short term internship. While she never imagined working for an auto shop, she ended up making a multitude of commercial and informational videos for Steve’s Auto Repair and Tire business and an online local newspaper, ‘What’s Up Woodbridge’.

But that’s not the whole story. Let’s back up a bit. My name is Roxana Trujillo. Although I completed my bachelor’s degree in Philosophy, I wanted to learn more about filmmaking. I had always loved watching movies and TV, but I had always wanted to know more; I wanted to know about the practical and conceptual aspects of film. Additionally, I’ve always loved the narrative aspects of film. While I take photos and write occasionally, film felt like the only true medium that would satisfactorily translate my imagination. I wanted to tell not only my story, but the stories of others and those that were make-believe.

I decided to temporarily “go back to school”. So, I enrolled in the introductory level film classes at Northern Virginia’s Community College in Woodbridge. While they don’t have an official film program, they have a dedicated triad of professor’s who lead it: Bryan Brown, Chris Stallings, and Kelly Cochran. Stallings teaches video production process, Brown teaches film theory and appreciation, and Cochran teaches literature and writing. The three make an ideal team and a great resource to anyone who is passionate about learning more about film.

I took a class from each Professor Stallings and Brown. I learned a lot from both, and the classes academically complimented each other very well. However, I’ve always been a very hands-on learner, so when January 2016 came along, I decided to enroll in video II. Around the same time, Stallings was aware that I was looking for work. One day, he contacted me about ST Billingsley’s need for an individual to help him make videos. It seemed to be a good fit, we tried it – and it worked. I spent a month at Steve’s Auto Repair and Tire, “cranking out videos” as ST likes to say. And let me tell you, it’s been quite a ride. (No auto-pun intended).

If anyone ever mentioned ‘auto repair shop’, only a few things pop into mind: cars, male mechanics, loud noises, and dirty junk everywhere. As a young female, due to culturally ingrained stereotypes, I also wasn’t how sure my presence would be welcomed in a perceived macho-male-dominate environment. While my experience might have aligned with my expectations if I were a mechanic, they did not, since I was here as a videographer and video editor. But that’s part of the whole point! I would have never even imagined any car repair shop doing video work! That was a complete novelty! And that’s one thing that makes Steve’s Auto Repair and Tire so special and unique. They don’t meet your expectations, they surpass them. And even better, they surprise you.

As an employee, I had an incredibly positive working experience. My colleagues were very laid back, yet professional and hard working. ST Billingsley is always enthusiastic, approachable and honest, which makes him a great mentor for any employee. Stephanie Tipple is the master of multi-tasking and is very knowledgeable in general, and always ready to talk about worldly issues.

During my time working with them, not only did I grow my experience in videography and editing, but I also learned new things unrelated to film. I learned about business, SEO (search engine optimization), online marketing, online news reporting, interviewing, and leadership. I had opportunities such as attending the Prince William Chamber of Commerce Women’s Leadership Conference, meeting and interviewing local leaders of the community. These leaders represent many local non-profit organizations, such as ACTS, Boys and Girls Club, Boy Scouts of America.

While they are not celebrities by any means, working for ‘What’s up Woodbridge’ gave me the possibility to give them the publicity they deserve, but often don’t get. Although I spent merely a month working for ST, we were always busy working on a plethora of projects that never ended. Honestly, because of the constant jokes and humor at Steve’s Auto, this month would have felt like work, but thanks to these crazy cucks, time flew by and I had a blast.